Your soccer team needs to run a meat fundraiser this summer 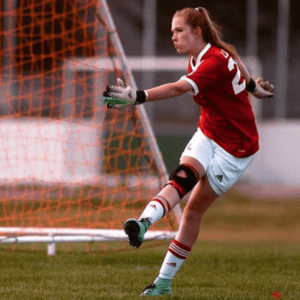 TeamFund is perfect for your soccer team’s next fundraiser.

I’ve been involved in soccer for 37 years. I was a player for most of that time, but now I’m a mom and enjoy watching my daughter play. I’ve been a seller during fundraisers in the past but joined TeamFund about 6 months ago as a writer. I’ve shared information on different topics that might be of interest to our community of players, parents, and vendors. What I haven’t done yet is to tell you a little about why I joined this fantastic team.

I actually met Dominique, the Founder of TeamFund about 5 years ago when our daughter’s played on the same soccer team. They ended up on different soccer teams a few seasons later, but we stayed in touch. I have been a part of a number of successful TeamFund fundraisers over the years. However, this spring I found myself as the Team Manager of my daughter’s new soccer team. Many of the girls had never been on an out of town tournament and I was tasked with organizing one.

I wanted something straight forward as the organizer but with a way to earn some real money for the team.

We have tried bottle drives in the past but summer is a tough time for those. Many of your players are taking holidays and so are the homeowners you are trying to collect from. If you can catch people just after New Year’s Eve it can work. However, you need to get there before they return their own empties. If you do, you can make a decent amount of profits. However, for summer fundraisers, these are often just a way to eat up a lovely Saturday afternoon for 15 families. 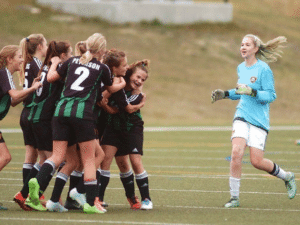 If it’s not hot out there, then it’s probably raining. The kids dislike it and so do their parents.  In the end, you may only raise a few hundred dollars for all your trouble.

There is also no way to quantify the effort you put in. We’ve been on bottle drives where my daughter is working hard, hitting as many houses as possible. Another player on the soccer team was wandering around, looking in puddles and twirling down the sidewalk. She made it to about a quarter of the front doors that my daughter did and when there were bottles to carry she seemed to disappear. In the end, they shared in the profits equally because they had both been there for 4 hours.

As the organizer I didn’t want all the hassle and frustration.

The summer is so short. For us, the outdoor soccer season is only in full swing for about 3-4 months. That means we have a short amount of time to plan, organize, and execute a fundraising campaign. So I wanted to find a way to raise funds in a short amount of time. Honestly, TeamFund couldn’t be a better fit for us. While I am a volunteer for the soccer community, I am also a busy mom who volunteers at a number of community groups. As an organizer I want it to be easy, but more importantly, as a seller I NEED it to be.

One of the things I’ve always loved about TeamFund is how easy the process is. From the first contact to collecting the profits, Dominique and her team make this the easiest fundraising you’ll do. So when I needed to organize our most recent fundraiser I knew just where to go. All the fundraisers, except for the Bacon fundraiser, which you can find HERE are run online. This means it’s cheaper, faster, and more environmentally friendly. Best of all, I promise, it will change your fundraising life. In the past, when I’ve organized an old fashioned paper fundraiser it’s a been a nightmare.

Not only do people lose forms or forget to hand them in but you are stuck chasing people for money and balancing the books at the end. It’s the worst part about organizing a fundraiser. 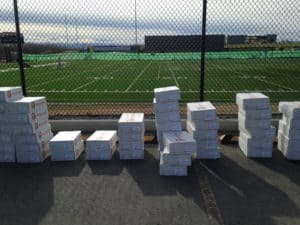 What I love about TeamFund is how it eliminates all of that. You can still access paper forms for supporters who are not comfortable with computers. However, most people buy at the online store and your job as the organizer is so much simpler. You aren’t spending hours or days sorting through everything at the end.

We decided to sell meat for my daughter’s soccer team.

Now that the snow is off the ground, people are starting to think about their BBQ. Whether it’s a get together with friends or a hot summer day people want to get outside. That makes vendors like Spolumbo’s, Bow River Meats, and the very popular Bacon fundraisers an easy sell to supporters. It’s also something our families want for themselves. We purchased meat during the fundraiser and filled our freezer.

Meat is something most of the families buy at the grocery store anyway.  A portion of that sale helped support my daughter’s soccer. 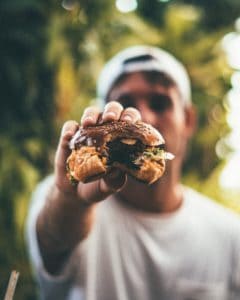 The meat from all of these vendors is top quality. In my opinion it is frequently better and fresher than we find at our local grocery store provides. We had no problem convincing our friends and family to support us when we are selling meat from TeamFund vendors. In fact, many of them look forward to our sale each year so they can stock up. For sellers this is a less intimidating fundraiser because you don’t need to beg people to support you or talk them into it. Whether they buy one item or ten, you get the profits.

As the organizer, I loved that it was so easy.

Organizing a tournament is a huge undertaking. To have the fundraising go so smoothly meant I had more time for other things. I did the entire set up online and then other than update emails out to the group, I didn’t have to think about it again. Dominique and her team were with us every step of the way. And as the mom who has watched some players coast while others really hustle I love TeamFund even more. As the organizer I was able to watch sales in real time. At the end we got a breakdown of everyone’s sales and the profits they earned. I didn’t have to calculate anything.

My daughter had her entire tournament paid for.

I joined TeamFund because I really believe in this company and our recent fundraiser further convinced me.

Dominique was a frustrated soccer mom who saw a way to make fundraising so much easier.

We had an amazing fundraiser and now we have all summer to BBQ delicious meals. The money raised helped our team pay for the out of town tournament and the girls got an amazing experience. Your friends and family are already customers. They will be shopping for meat and you are missing out on the profits if you don’t run fundraiser. It’s a win-win situation and now is the time to act. With our amazing weather, people are ready to hear from you.

Don’t miss out on our short summer soccer season and don’t waste a weekend knocking on doors asking for bottles.